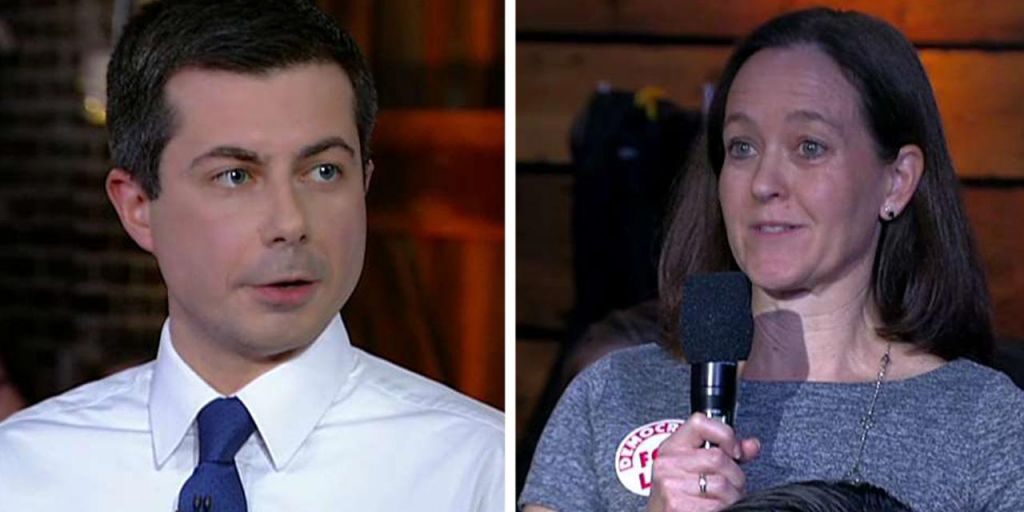 “When it’s my turn, you have to promise to stand up and shout, ‘Good question!’”

“Sure,” I laughed, responding to Kristen. It was January 27, and I was joining Kristen Day, DFLA’s Executive Director, and Terrisa Bukovinac, our National Organizing Director, on a trip to Iowa, where the Democratic primaries were in full throttle.

We were there because Kristen had been invited, by Fox, to ask Pete Buttigieg a question about the place of pro-life Democrats in the Democratic Party. There were around 300 people in the room, and Chris Wallace was hosting, while also taking questions from the audience.

Cue moderate applause. Also cue Terrisa, who was sitting next to me, standing up in her seat and yelling, as loud as she could: “GOOD QUESTION!” You can just make it out in the audio on Fox News.

It was in fact a good question, and in the 24 subsequent hours after Pete’s respectful but insubstantial response, I realized two things.

First, I resolved that I should stick by my promises like Terrisa and, where appropriate, feel comfortable yelling on national TV.

Second, I realized how truly, deeply afraid the abortion lobby is of Pro-Life for the Whole Life Democrats. In the hours that followed, Ilyse Hogue, President of NARAL Pro-Choice America, spewed out a response on Twitter to her 70,000 followers.

I realized how truly, deeply afraid the abortion lobby is of Pro-Life for the Whole Life Democrats.

“As we saw tonight,” Hogue wrote. “Our opponents will ambush our candidates, use disinformation, and do anything else they can to reach their end goal of criminalizing all abortions and robbing women of fundamental freedoms.”

The greatest fear of the abortion industrial complex isn’t the Republican Party. It’s not even that Roe v. Wade will be overturned, and that they will have to actually bring their case to the American people, rather than legislating from the judicial bench.

It’s that we, Democrats for Life of America, will disrupt their incestuous relationship with the Democratic Party.

Hogue, and others, know that we have a compelling message. It’s easy — and in some cases, it makes sense, to demonize Republicans — who, for example, vote to end abortion while upholding the awful practice of capital punishment, which disproportionately affects Black men.

It’s much harder to make a case against authentic, bona fide Democrats with a compelling, Pro-Life for the Whole Life philosophy.

It’s much harder to make a case against authentic, bona fide Democrats with a compelling, Pro-Life for the Whole Life philosophy.

Right now in America, no other group is fighting as hard as we are to defend Whole Life values in a consistent way, in America’s major left-leaning party: from Black Lives Matter, to defending labor, to protecting the pre-born.

(This experience is not unique: most immigrants to the US, especially from Latin America and the Middle East, are overwhelmingly pro-life, while struggling to feel at home in the Republican Party.)

So for these reasons: I am a proud supporter of DFLA’s mission. The partisan divide in America’s politics on abortion is wholly unreflective of political polling and demographic reality.

We can change that. It’ll just take a small, committed group of people, working very hard.

The views expressed by our writers are their own, and do not speak for the organization. For a collection of official DFLA views and mission, please see our website.

Xavier is a long-time pro-life and consistent life activist. He grew up in Australia, before studying politics at Trinity College, Cambridge as a Commonwealth Scholar, where he edited the student newspaper and founded the pro-life society. After studying at the University of Virginia as a Lenox-Conyngham Scholar, he moved to the US, where he now works in business in Washington, DC. In 2019, he worked on post-ISIS reconstruction projects in Iraq. He has written for The Wall Street Journal, America Magazine, and National Review. He is a Side B Christian. At DFLA, he acts as a volunteer Director of Operations. In this capacity, he sponsors DFLA’s Candidate Committee, which runs DFLA’s campaigning, lobbying, and candidate support efforts.

The Whole Life Democrat: A Project of Democrats For Life of America

In Honor of Governor Robert Casey and Sargent & Eunice Shriver

In 1992, Robert Casey and Sargent and Eunice Shriver took out a full page ad in the New York Times outlining A New American Compact: Caring about Women, Caring for the Unborn. It spoke to the heart of the consistent life ethic and whole life principles we share as Pro-Life Democrats. The writers on this blog, a project of Democrats for Life of America, look to promote the best of the Democratic tradition, which is articulated so eloquently in this compact, for the respect and dignity for the whole person.